(i)   Beyond all boundary fences
(ii)  Beyond the line of white posts dividing the course from the practice facilities
(iii) The Clubhouse area and putting green as defined by white posts, paving stones or flower beds

Ground under repair is defined by any area encircled by a white line. Relief under  (Rule 16.1)

All fixed sprinkler heads are immovable obstructions and relief from interference may be taken under  (Rule 16.1)

The player also has these extra options to take relief when such immovable obstructions are close to the putting green and on the line of play:

Ball in General Area. The player may take relief under  ( Rule 16.1b) if an immovable obstruction is:

On the line of play, and is:

Within two club-lengths of the putting green, and

Within two club-lengths of the ball.

Exception - No Relief If Line of Play Clearly Unreasonable.

The young trees identified by white lines or stakes are no play zones:

If a player's ball lies anywhere on the course other than in a penalty area and it lies on or touches such a tree or such a tree interferes with the player's stance or area of intended swing, the player must take relief under          ( Rule 16.1f.)

If the ball lies in a penalty area, and interference to the player's stance or area of intended swing exists from such a tree, the player must take relief either with penalty under  (Rule 17.1e) or with free relief under ( Rule 17.1e(2).)

Penalty for Playing Ball from a Wrong Place in Breach of Local Rule:

If it is known or virtually certain that a player's ball hit a power line  during the play of 7th and 9th holes, the stroke does not count. The player must play a ball without penalty from where the previous stroke was made (see Rule 14.6).

All penalty areas are defined by red stakes/lines. If a player's ball is in a penalty area, including when it is known or virtually certain to be in a penalty area even though not found, the player has these relief options, each for one penalty stroke:

All roads and paths on the course,  even if not artificially-surfaced, are treated as immovable obstructions from which free relief is allowed under ( Rule 16.1).

All marker posts  on the course are treated as immovable obstructions from which free relief is allowed under    ( Rule 16.1). Relief is not allowed to be taken under ( Rule 15.2.) Penalty for Breach of Local Rule: General Penalty.

If a group finishes the round more than the starting interval behind the group in front and over 4 hours from the time of starting, all players in the group are subject to a penalty.

Penalty for Breach of Local Rule:

Third breach: General Penalty applied in addition to the penalty for the second breach. 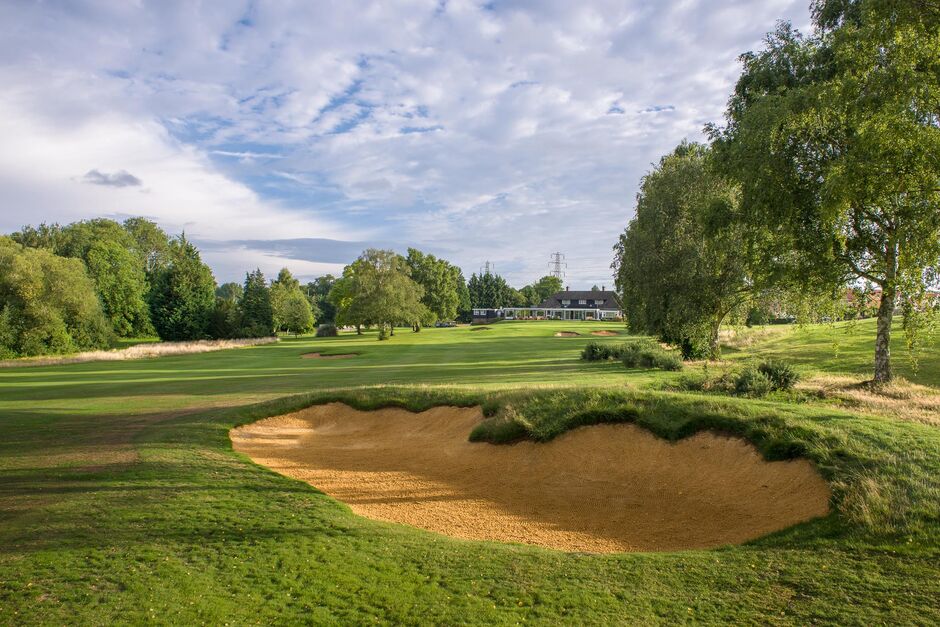