Details of cups and trophies played for in the Senior Section

A winter pairs betterball Stableford competition that is played from October to March. There are five rounds and each pair is able to discard their worst score.

The trophy was donated by Neil Webber and Mac McIntosh in memory of Bill England and was first played for in 1988.

Bill worked on the railways for many years and was a keen orthinologist. When he wasn't playing golf, Bill and his wife could often be seen on the course, studying the birdlife and identifying their sounds.

A summer foursomes knockout competition that runs from May through to October, with the final played on the club’s Finals Day. The allowance is half of the combined handicaps.

The cup was donated by Roy Coaker, Canterbury club captain in 1986, and was introduced in 1988.  Roy was a long-serving and highly-respected teacher at the Frank Hooker Secondary School in Canterbury, where he taught mathematics, was careers adviser and was a popular head of sports.

Donated by 1980 club captain Gerry Pritchett, who served on the club committee for 14 years, the consistency cup is awarded to the member with the highest total from their best six seniors' Stableford competitions in the 12 months from November to the following October. In the event of a tie, the player with the best seventh score will be adjudged the winner.

An 18-hole bogey competition off full handicap, the cup was donated by Ron Gibson, who joined Canterbury from Walmer and Kingsdown Golf Club. Its inception came in 1997.

A summer singles matchplay competition, played off the full handicap difference, that runs from May to October, with the final played on the club's Finals Day.

The salver was donated by local businessman Bob Howe, who ran his own painting and decorating business, and it was first played for in 1985.

Eric Impett was a former miner at Snowdown Colliery and went on to become secretary of the Kent PGA. He introduced the trophy in 1991 as a winter matchplay event, played off full handicap, that takes place from October to the following March.

Winner of the prestigious Pilgrims Cup in 1970, Eric excelled at a number of other sports, among them football and cricket, and his son, Brian, became a club professional.

An 18-hole Greensomes Stableford competition, the Martin Wilkinson Cup was launched in 2007, having been donated by Martin Wilkinson, who first joined Canterbury as an artisan in 1956.

The allowance is determined by multiplying the lower handicap of the two players by 0.6 and the higher handicap by 0.4 and combining the two.

After nine years as an artisan member, Martin took out seven-day membership but eventually left the club in 1979. By then he had won the club's main open tournament, the Pilgrims Cup, and had established himself as a consistent, low-handicap player.

He rejoined the club in 2002 and became a member of the Senior Section.

The Shuters Cup is an 18-hole betterball Stableford competition, played off 90 per cent of the team members' handicaps.

The cup was donated for competition in 1987 by club member Frank Shuter, who ran the sub-post office in Northgate for many years.

The trophy was donated by Fred Newing and was introduced in 1984 as an 18-hole medal event for winners of prize vouchers during the period November through to October of the previous year. Fred served in the military and then worked at the Ministry of Defence. He was club captain in 1969.

The Seniors’ Captains’ Cup was donated by Alan Eeles and first played for as an 18-hole Stableford competition in 2005. Alan joined the club in April 1980 and was elected seniors' captain in 2005. He served as seniors’ competition secretary from 2006 until retiring in 2020.

This competition debuted in 1975 as an 18-hole medal event. The cup was presented to the seniors by Trevor Morgan, who owned the St George's Post Office in the city's Lower Chantry Lane.


The 18-hole medal competition was introduced in 2011 with the cup donated by George's family.

It is presented to the top scorer when competing members' best Stableford points tally for each of the 18 holes throughout the year from November to October is accumulated.

Keri, a club member since 1988, retired from the position of regional manager for the Nationwide Building Society, London and South East in 2009.

An annual event, the Seniors' Open was first played for in 1997. Entry forms are sent to clubs in Kent and South London and there are separate prizes for members and visitors.

This is an 18-hole team Stableford Competition in which each team comprises one Canterbury member and three visitors. The teams are drawn and the best three scores on each hole count towards the team score..

Members are able to invite friends or associates from other clubs to compete in an 18-hole betterball Stableford competition off 90 per cent of their handicaps.

The competition fee includes the cost of lunch for the pair.

A three-player team competition, the format of which is decided by that year's senior captain. The captain provides the prizes and the entry fees go towards his nominated charity.

An 18-hole Stableford event for teams of three with the best two scores counting on each hole.

Teams of three players participate, with each player requiring to provide a minimum of four tee shots. 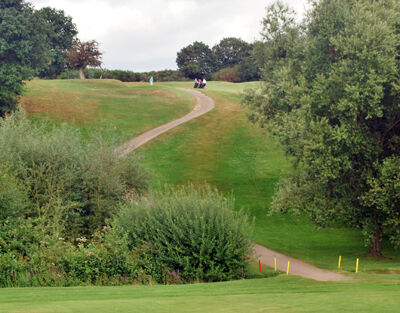